On the 7th February 2019, a day after the death of his grandfather Petar pl. Bulat, H. I. H. Jacob, Prince of the Vlachs invoked his ancient right to use the title of “Prince of the Vlachs” and began working on the creation of the first Vlach ethnic state, the Principality of Vlachia. This right passed to him from his grandfather who was the last direct descendant of Bulat Kustražić, a knight and nobleman mentioned in the medieval document Law of the Vlachs of Cetina from 1436. This event was commemorated by the writing of the document called the Charter on the Establishment of the Princely House of Bulat. The whole document is written here below:

In the name of the Father and of the Son and of the Holy Spirit. Amen.

I, Dominic, who by my faith in the Triune God and in the one holy, Catholic and apostolic church, call myself Jacob, being the last catunar by blood, to whom the noble house of Bulat was given by the catunar Petar pl. Bulat (✶ 1931 – † 2019) and whose old nobility and whose old rights were confirmed at the castle of Klis on the eighteenth day of March 1436 after the birth of the only true king of kings, our savior Jesus Christ, under the laws of the Kingdom of Bosnia and confirmed by Ban and Prince Ivan VI Frankopan († 1436) and before that from the ban and prince Ivaniš Ivanović Nelipčić († 1434) and his father ban and prince Ivan Nelipčić († 1379), I invoke the valid, ancient and confirmed right of my blood for the catunars to choose the Vlach prince that is a prince of all the Vlachs among themselves, and their dukes. As the last catunar and descendant of Bulat Kustražić who fell in 1440, fighting in the service of Grand Duke Stjepan Vučkić Kosača († 1466) and as the last who can choose and as the last to be elected Vlach prince, according to the my word as a gentleman and my vow of knightly honor towards the Immaculate Heart of the Blessed Virgin Mary, I raise with piety the noble House of Bulat given to me and enthrone the Princely House of Bulat and take my own baptismal name Jacob as my ruling name in resemblance to the Old Testament patriarch Jacob, the ancestor of the twelve holy tribes of Israel. Let the banners of the Princely House of Bulat  stand upright on the spears of St. Demetrius and St. George whose blessing and intercession I invoke over the Princely House and whom I appoint as the first dukes and protectors. The testimony of my name is confirmed by the seal of the princely house on the seventh day of February in the year of Our Lord 2019, after the death of Petar pl. Bulat and the passing of the old noble titles and headship of the house inheritance to me. Through Christ our Lord. 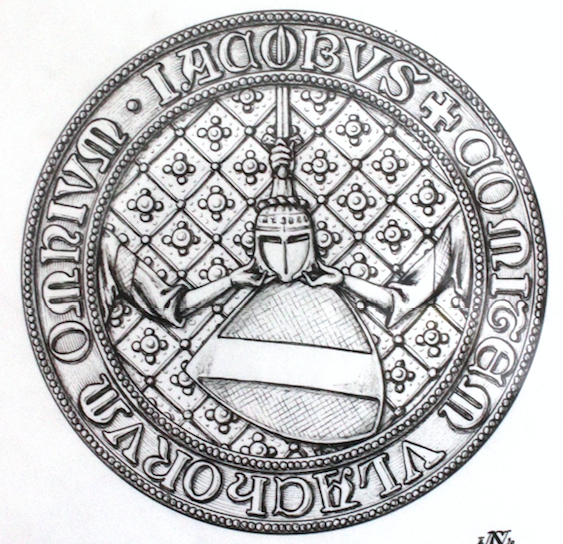